You Raise Me Up

My children are such a disappointment.

Remember that party you went to in high school?  The one at the abandoned warehouse/parentless friend's house/downtown loft that you were totally not supposed to be at?  It was the party where at first you thought it might be fun-a little scandalous and a little outside the norm.  But after a short while you couldn't find your friends, felt the walls closing in on you, and were dying of thirst because you weren't sure you should be drinking any of the liquid offered at this party.

Guess what?  You're back at that party.  With two year olds.  I'd like to introduce you to the indoor playground.  It's loud, smelly, loud and full of other people's kids-the worst kind.  We have a few of these playgrounds here in Atlanta.  They have cute little names like Hippo Hop, Jump Jump, Catch Air...  when what you're most likely going to catch is The Ebola Virus.

On a rainy Sunday (two words never to be associated with an indoor playground) Josh and I take the lunatics to our local indoor hell hole.

I take on Summer duty while Josh takes on Austin duty.  Austin likes to run all over the place while I prefer to sit on my ass with the child that typically walks in circles in a 2 square foot radius before making the epic decision to go down the 3 foot slide.

I strike up a conversation with another mother whose daughter also happens to go to Austin and Summer's Academy for Geniuses.  She remarks how cute and sweet my child is, and is impressed by the gargantuan bow on my child's head.  I drink in the praise eager to show her that I not only have one adorable, lovely, perfect child, but she comes as a set.  She is, in fact, a twin!
I see Austin running over with a big grin on his face, followed by his daddy.

I'm about to remark to the other mother, "Oh! Here comes my son!" just as Austin approaches and proceeds to smack the woman's daughter on her head repeatedly with both hands.  The woman, appalled, comforts her crying little girl, while Josh swings Austin away to have a chat about child abuse and spend some quality time out.

I turn to the woman and say, "My goodness, people just need to keep a better eye on their children" before excusing myself and Summer to go play away from such a fragile, sensitive child.

I, however, am not the least big surprised by Austin's behavior.  Just last week I snuck a peek in his classroom as I saw him repeatedly smacking a baby doll and telling his teacher, "Baby is crying! Baby is crying!"

I'll say what every other mom is thinking- as long as it's not MY baby crying, we're good to go.

So fast forward about a year from whatever you read last and here I am with my almost two and a half year old twins in the bathroom of one of our favorite lunch spots.

Going to the bathroom at a restaurant is always a challenge.  And I'm just talking about ME going to the bathroom.  The kids don't count because I won't let them get potty trained.  I prefer them in diapers.  Their pants fit better, it's amusing to me that they can pee and poop in any situation, anywhere AND I love spending money on things we don't necessarily need.  Just ask my husband.

So I ask myself multiple questions when I have to go to the bathroom at a restaurant.
1.  Do I REALLY have to go?
2.  How long can I hold this before I develop a urinary tract infection or my bladder bursts?
3.  How important is my bladder, after all?

Once I decide to make the obligatory trip to the bathroom, I have to decide if I'm going to bring the children.
1.  How sketchy are the people sitting around me?  Would they steal my children if I just leave them here?
2.  How insane are my children today?  Would somebody even want to take them home with them?

Sidebar:  I seriously heard the other day that a kid was abducted from his driveway but was returned the same day because he would not stop singing Gospel songs.  If that's true, I totally need to start teaching my kids some Gospel.

Eventually, I decide to take the kids with me, which often means Summer bringing a piece of a pancake or quesadilla to the restroom, because, heaven forbid she go 3 minutes without food.

Bringing toddlers in a public setting is always a questionable decision because you never know what they might say.  A bathroom is even worse because the conversation is entirely run by the potty.
So today, we're in the stall, I finish doing what I have to do, and Austin yells out, "Mommy's wiping her penis!"

Well, this is just wrong.

First of all, I don't have a penis.  And the last thing I'm going to do is let my son go back to preschool tomorrow telling his teachers I wipe my penis.  So of course, I correct him.

Summer: (48 decibels louder) "Mommy has a vagina like Summer!!"

Who knows if everyone in the restaurant heard but they all have penises or vaginas too so the conversation is actually pretty banal.

When we return to our seats, Austin announces that he wants to go poop on the potty.  And because he's not potty trained I tell him to sit and eat his food.

But he continues to shriek about pooping on the potty.  This wouldn't be so awkward if people were less PC and more willing to talk openly about their bowel movements, but apparently talking about pooping in public is a faux pas.

I tell him to poop in his diaper.  That's what it's there for.  He won't have any of it.  So we return to the bathroom but leave Summer to fend for herself in the restaurant because there's no way I'm taking her away from her mound of uneaten food.  I ask everyone in the restaurant to watch her.  They seem like good people.

So I spend the next ten minutes in the bathroom stall listening to Austin say, "I poopin' Mommy!" while he just sits there pressing on his little penis and making zero progress.

Did we make potty training progress today?  Couldn't care less.  I can tell you one thing.  When I'm ready to actually potty train my kids, they are not getting candy, rewards or cheers for peeing in the toilet.
No one cheers me on for peeing in a toilet or gives me a bowl of ice cream for going #2.

Welcome to the real world, kids.  All you need to know is boys have a penis and girls have a vagina.  And you don't get candy for pooping on the potty. 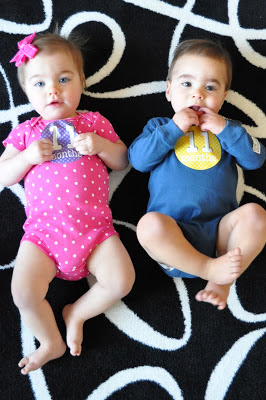 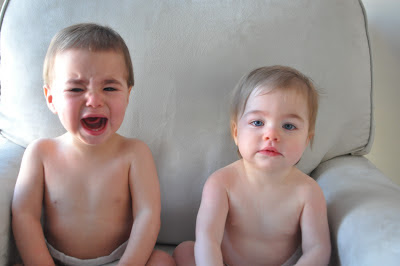 Email ThisBlogThis!Share to TwitterShare to FacebookShare to Pinterest
Labels: monthly

I suck at blogging.  But my kids don't suck at being babies.  They're sort of awesome at it.  As told by my husband, Josh.